BOB DYLAN has been producing and displaying visual art for the last decade. It is a somewhat puzzling endeavour, given that it has never met much acclaim (but has attracted controversy, as critics thought some paintings resembled famous photographs). Is it not enough for Mr Dylan to be one of the best singer-songwriters in history, a judgment cemented by his win in 2016 of the Nobel prize in literature? He was hailed by the committee as a “great poet in the English tradition”. 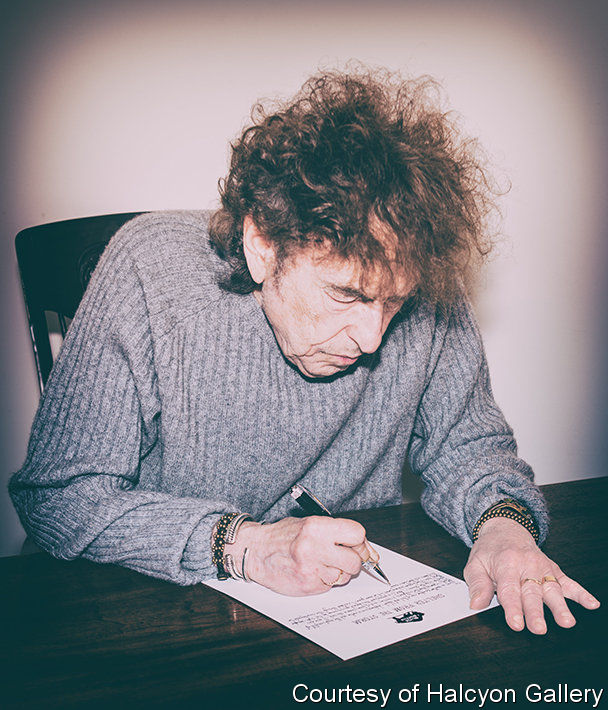 It seems it is not. For a show at the Halcyon Gallery in London, he has created nearly 60 new drawings, displayed alongside paintings and ironworks. The sketches are the main attraction as they illustrate a number of his most famous songs. A set of handwritten lyrics hangs beside each image; Mr Dylan has tinkered with his words over the years, and some of those on show are subtly different from the original version, while others have been substantially rewritten. It is the first time that he has wedded his music and his visual art.

Are Mr Dylan’s drawings good? They’re pleasant, certainly: he’s far above average in terms of skill. Some are quite moving, but not particularly original or striking. They suggest that if Mr Dylan had dropped the microphone and picked up the sketchbook instead, he would have been a good amateur artist, attuned to trees and faces and scenes of Americana. But the show is not so much about the drawings themselves as it is about his music. The sketches are a kind of self-annotation, offering insights into his six decades of song-writing. The result is a fascinating show.

Taken together, some of the pairings are immediately obvious. The song “Leopard-Skin Pill-Box Hat” is illustrated by a woman in, well, a leopard-skin pill-box hat. For “Maggie’s Farm”, Mr Dylan offers a farmhouse affixed with a sign for fresh eggs; this literal image is a bit of a let-down for the famous bluesy anti-capitalist protest anthem. Other drawings are more cryptic and seem to bear little relation to the lyrics at all. These are the more interesting ones, which rely on resonances and deepen meaning rather than flattening it.

The men Mr Dylan draws are especially intriguing. The drawings for “Just Like A Woman” and “Don’t Think Twice (It’s All Right)” are arresting, both featuring faceless men. One, in a hat, is a visual echo of Magritte’s bowler-hat men, elusive in pencil. One of his two illustrations for “Ballad of a Thin Man” features a circus performer outside a carnival tent, face turned upward as he plunges a knife down his throat (pictured, below). The sword-swallower appears in the song, but only briefly, and this image of strength, vulnerability and masculine showmanship exposes an undercurrent in the lyrics. Sometimes, Mr Dylan draws men’s feet or hands, as in the image for “Man in the Long Black Coat”, which pictures legs and shoes on a dock with a view to a distant island. These images feel like quintessential Dylan: melancholy, quietly painful, distilled. The viewer might wonder if any of these men are versions of himself.

The lyrics themselves prove captivating: it’s a thrill see Mr Dylan cross out “raging” and replace it with “rolling” in his description of the sea, or to notice that he spells “sailors” as “sailers”. Encountering his handwriting feels like a form of intimacy. But while his lyrics can be read, as the Nobel committee argued, as poetry, they really are best when they’re sung. To read Mr Dylan’s spindly script on a gallery wall is a kind of work; to listen to his songs is a more passive, emotional experience that imbues them with meaning. Listening may be closer to the experience of visual art than reading.

Yet if one knows the songs well, and just looks—or perhaps if one looks and listens to “Highway 61 Revisited” on headphones—it is wonderful to glimpse Mr Dylan’s visual imagination, especially when it is unexpected. The drawings are like stills of memory: a woman gazing out the window, framed by an air-conditioning unit. A child reaching out for a balloon that is now floating above a skyline. Saints are bowed in prayer. Incongruously, next to the words of “Hurricane”, a baseball pitcher is poised mid-throw.

True, these images wouldn’t mean much to us if Mr Dylan weren’t Mr Dylan—the same is true of John Lennon’s line drawings, and David Bowie’s self-portraits—and they probably wouldn’t be in a gallery. Artistically, though, a sketch is often a kind of suggestion, an unfinished outline or a possibility for a larger work. These sketches open a unique window into Mr Dylan’s imagistic mind and suggest new ways to hear his songs.