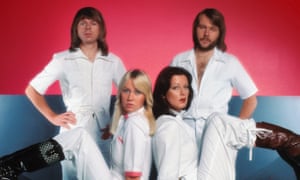 Abba fans will have to wait a little longer for the group’s first new music in 35 years, with the release now scheduled for the second half of 2019.

In April last year, it was announced that the superstar pop quartet had reconvened in the studio for the first time since their split in 1983, as they prepared a tour in which their music will be performed by virtual reality avatars. “It was like time had stood still and we had only been away on a short holiday,” they said in a statement. “An extremely joyful experience!”

They recorded two new songs, one of which was due to air in a TV special in December 2018. But the release was pushed back initially to early 2019, with the group’s Benny Andersson saying: “I think we are talking about the beginning of next year now.”

A representative for the group has now told Variety there will be “no release before the summer … Hopefully this fall.”

Andersson has recently hinted at legal troubles holding up the release, saying in an interview: “We are still trying to establish the agreement that needs to be done to be able to continue.”

Hinting at the sound of the tracks, he has said: “I am very proud of both songs. One is like a pop song from the 70s. The other one is kind of timeless.” He has also said there was the possibility of the group reconvening to record a third song this year.

Dates for the avatar tour have not yet been announced, though demand is likely to be high because Abba’s music continues to be hugely popular. The sequel to their jukebox musical film Mamma Mia! grossed $394m worldwide, $84m of that coming from the UK, where it was the second-highest-grossing film of 2018 after Avengers: Infinity War.